Borea ‘Domingo’ Domenico is a very talented artist from Italy whose cool drawings and paintings can be found under the banner of DomingoArt all over the best parts of the Internet.

The subject matter he takes on is always rock & roll from music icons to movie characters and memes. Sometimes he’s going with a realistic depiction, other times he’s primarily capturing the energy or the spirit of a particular individual and their work. 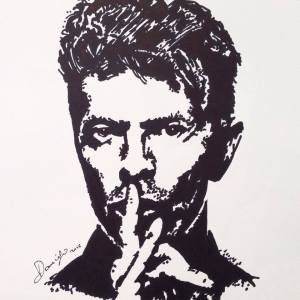 You can tell that DomingoArt has an affinity towards his subjects and enjoys art full stop. He’s very prolific, delivering one stylish, funky piece after another and, if you like rock music, it’s impossible to not find something you like.

On the artist’s DomingoArtStore, you can find all sorts of goodies, not just paintings and drawings but T-shirts as well. Custom orders are totally doable and the store is very accommodating.

That’s just an example of what you can expect when you’re checking out the store, looking for badass Joe Strummer T-shirts.

DomingoArt is also present on Twitter @Domingo_Art, on Instagram @domingoart_official, Facebook and Tumblr where you can see his progress when he’s taking on a new piece as he posts updates regularly.

Definitely check out DomingoArt, he’s a fab artist to look out for and a really nice guy. Plus you can commission pencil drawings from him if you want so if you’ve got a gift you’re planning or something obscure you want for yourself, this guy’s got ya covered. 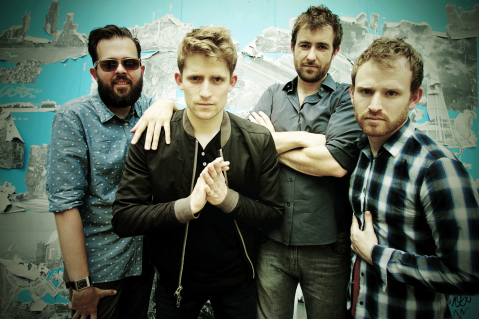 Here’s a band you guys should really look into and expect great things from.

Clones Of Clones are an alternative rock band from Washington D.C. with some very promising output which looks set to blow-up in a massive, positive way very, very soon.

There’s a versatility to their style which means that they can comfortably dip into more indie territory one second, tackle something a bit more bluesy the next and pick up a poppier vibe at times while still sounding like themselves and delivering fresh, well put-together tunes.

One of their EPs which you can find on SoundCloud is their 2013 debut Neighborhoods, a 4 track-long mini album with some killer psychedelic cover art and, of course, some cool music.

“Bully” is the second track from Neighborhoods and it certainly gets that slightly 90’s vibe across quite well with a catchy chorus, a chilled-out rhythm and some welcome attitude. The other tracks are also well worth listening to as the title song, “Neighborhoods”, boasts some great lyrics and both “Homie” and “Take Care Of Yourself” have a genuine emotional punch to them.

Do check out the band’s Youtube channel because you’ll be able to find those songs and much more on there.

Which brings us to the really cool part: there’s a new EP on the way and the teaser for its explosive title track “I Don’t Need Your Love” is up!

This is a short but sweet example of how good the full song and its video will be and, having listened and viewed both, I can safely say that this should be the breakout hit the band are looking for and deserve: its Black Rebel Motorcycle Club-esque swagger and catchy-as-hell chorus alone make this one a must-hear.

And, if every song on the EP is as good as this one, which I’m sure they are, then you’ll probably want to head over to iTunes come November 11th and purchase I Don’t Need Your Love because it’ll be worth it to say the least.

More information on Clones Of Clones can be found on their website and their Facebook page which you’re very welcome to “Like” (same goes for ours, hehehe).

The band is also active on Instagram and Twitter so there’s no excuse to not bring these Clones Of Clones into your lives, like, right now.

To say that up-and-coming London-based German singer Babsi is ambitious would be an understatement.

The artist has not only one but two promising projects underway which both serve to bring out both sides of her personality to the world musically.

Pusca are a band from North London, with Babsi on vocals, Damian Clay on guitar (and vocals) and John D on drums. Taking the narrative cues from traditional English and Celtic folk music, their material touches on the social and the personal, placing the story as the song. Their set recalls numerous musical influences that fuse into a dynamic Alt/Indie/Americana sound with a West Coast feel.

Edith Sitwell described them as, ‘Pearl Jam meets The Smiths at a party Lou Reed threw for Blondie.’

Here’s one of their videos for their heartfelt 90’s-style ballad “Shoot For You”:

When the alt. rock band, Kodiak Moon, split up, and the members were left looking to start a new project with a fresh new vocalist. In March 2012 they put out feelers far and wide to try and find a singer with the talent required to fit the bill and it would turn out that the vocalist they saw at the first audition, Babsi, would be the one they would finally select. Rehearsals began straight away, working on a number of the tracks drawn from the Kodiak Moon repertoire. But it soon became clear that Babsi was a different kind of vocalist with a subtle and yet defined approach to heading the band. So work also began on a new set of songs that took the now titled band, Pusca, into a more folky, poppy and jazzy direction.

The band played their first gig at the Trinity Bar, Harrow, in June of 2012 and spend the rest of the year performing on the London circuit at venues like Surya, The Underbelly of Hoxton, The Enterprise, Camden Rock, The Mother Bar, Nambuca, The Water Rats, The O2 Academy and many more besides.
Here’s a sample from one of their Camden Rock gigs performed last year:
They began working on their first album, Secrets Half-Revealed in May 2013. The album was officially released in November of last year. You can find some of their work on their website.
By December, they even got festive and offered their fans a Christmas song:
In August 2013, Pusca played live to over 10,000 listeners on the Jonjo radio show at Rag Radio. The Youtube video of this acoustic performance has since gained almost 15,000 hits:

Pusca continue to concentrate on the London scene and are currently embarking on a series of gigs. Look out for their stuff over on Facebook where you can “LIKE” their page entitled, simply, “Pusca”.

This year, Babsi unveiled her solo project which opened with debut single “We Are Everywhere”, inspired by Stephen Fry’s idea that all athletes competing in the 2014 Sochi Winter Olympics make a simple gesture, crossing their arms over their chests to show solidarity and support for the LGBT community of Russia. A gay rights protest music video was released and illustrated the gesture in an upbeat, positive yet defiant manner:

“Russia needs to understand that there are millions of people worldwide who are offended by the Russian government’s treatment of the LGBT community,” said Babsi, “I thought Stephen Fry had a fantastic idea to enable those participating in the games to be able to make a subtle protest.”

Damian Clay, who wrote the song and directed the video said, “It’s just too late now to try and convince ours or any other government to boycott the games in protest; though I believe that, were this racial or religious prejudice on display, that some countries would have stopped their teams attending. With that in mind it’s more important than ever that we have some way of letting the Russian LGBT community know that they have some support from the countries who are participating.”

Gay presenter, Jonjo, who appears in the video, said, “It’s vitally important that this issue be front and centre throughout the course of this Olympiad. Ignoring it won’t make it go away. We’re a natural division of humanity; we need our rights respected and our people supported.”

“We Are Everywhere” is Babsi’s first release as a solo artist and she will be launching a solo album later this year, which will include this track. 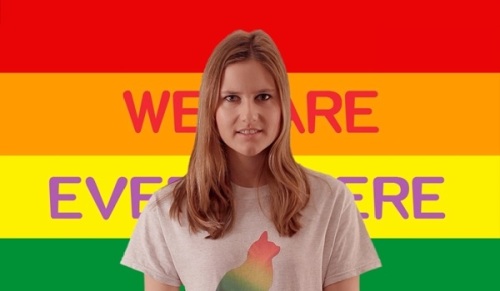 This single is currently available to buy on iTunes, do make sure you show your support if you can.

Expect many more great things from both Babsi and Pusca very soon.